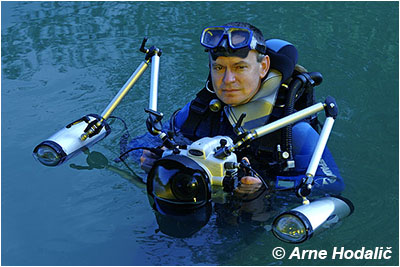 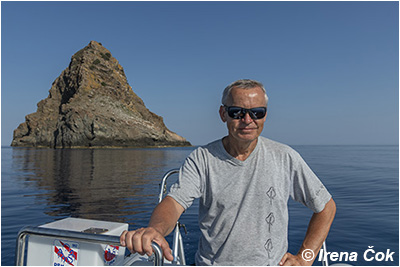 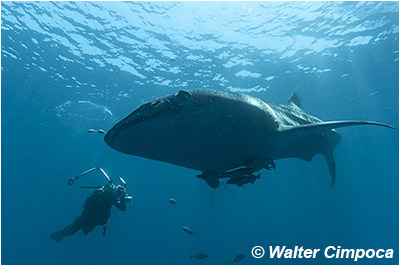 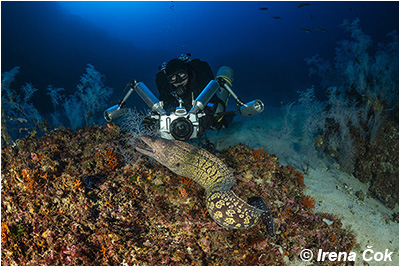 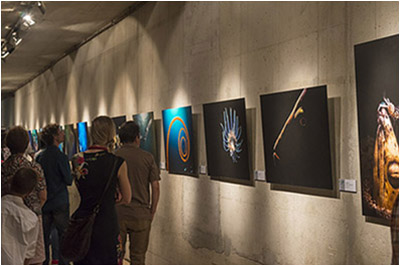 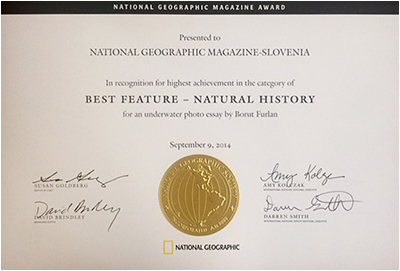 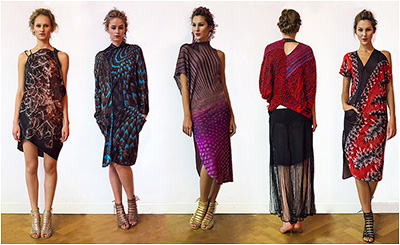 Borut Furlan is a leading underwater photographer in Slovenia. He lives and works in Ljubljana, a capital of Slovenia.

Borut started diving in 1977. He is instructor of recreational diving, trimix diver, rebreather diver, cave diver and instructor of underwater photography as well. Currently he loges more than 5500 dives in various places around the world, but the majority of his dives he performs in Adriatic sea (see the diving locations below). He dives in various aquatic environments, including lakes, rivers and caves, but his greatest passion is a deep sea diving, in depths inaccessible to recreational divers. Unlike the majority of technical divers, Borut is much more interested in aquatic life than in wrecks.

Borut entered the world of underwater photography in 1979. In the beginning he built his own underwater housing for his first camera (Exa 1a). Later he switched to Nikon and now he uses Nikon cameras for more than 40 years. For his first two Nikon cameras (F3 and F4) he built next three housings, but with his last film camera (Nikon F5 in 1998) he started using Seacam underwater camera housings and accessories. In 2006 he switched to his first digital camera (Nikon D2X), followed by Nikon D800 (in 2012) and Nikon D850 (in 2019), all housed in Seacam housings.

He continues to construct his own equipment, like underwater tripods, and in 2014 he adapted Nikonos RS 13mm f/2.8 fisheye lens to work on modern digital cameras in underwater housings. He employed a unique idea of splitting the original lens into two parts - the front lens element and the rest of the lens. He attached the front lens element on the housing as a kind of dome port and made a new housing for the rest of the lens, which was attached directly to the camera. Later, his idea was adopted by Seacam. This story is described in detail in a separate article.

In the beginning of 2020 Borut was involved also in underwater video, when he was asked to film underwater scenes for documentary Wild Slovenia, directed by Matej Vranic.

Borut has been participating in underwater photography competitions since the beginning of his career. He started with "photo fish-hunting" (to catch as much as possible different species of fish on one roll of film) and already in 1985 he won the title of national champion in his former country - Yugoslavia. In the last days of former Yugoslavia (1991), Borut joined the national team for the 1st International championship in "photo fish-hunting" on Sardinia, Italy, where the team won the 3rd place.

In ten years, from 1994 to 2003, when he quit competing in national contests in Slovenia, he won the title of the national champion in general underwater photography every single year. Later he won many international contests in underwater photography, including World Shootout (Israel), Ocean Art Contest (USA), Underwater Photographer of the Year (UK), Deep Indonesia (Indonesia), Ocean Geographic Society (Australia), LAUPS (USA), Beneath the Sea (USA), Our World Underwater (USA) and the 3rd place on the CMAS World Championship in Underwater Photography (Egypt, 2000).

Although Borut has a master degree in chemistry, he has also great interest in other natural sciences, especially in marine biology. He discovered many rare and previously unrecorded marine species in Adriatic Sea. One of them was a little wrasse Lappanela fasciata, discovered in 2005 in depths below 60 m around a small Adriatic island. The other previously unrecorded fishes in Adriatic Sea are a little cave goby Gammogobius steinitzi and a fangtooth moray Enchelycore anatina.

His work was published in many domestic and foreign publications, including National Geographic Slovenia (nine stories, two cover shots), where he was also nominated for the "best edit" in 2013, 2020 and 2021. He has more than 80 cover shots in various magazines and books. His images are selling in various stock agencies around the world. He published several calendars and cooperated in numerous book editions.

In 2006, he presented the first Slovenian underwater photo monograph, "A Journey into the Silent Worlds (Underwater Photography 1995 - 2004)", which was shot exclusively on film. In 2013 he published his second coffee-table book, a photo monograph "Piran, Where the Sea Meets the Town", a story about small Slovenian coastal town and underwater world around it.

Borut has also numerous photo exhibitions, lectures and slide shows in Slovenia and in neighboring countries. He is often a member of jury on various underwater photo competitions. He organized and performed the first comprehensive (two week duration) courses on underwater photography in Slovenia (and wrote his own textbook for these courses).

Borut's images inspired even some fashion designers, who used his abstract motives for their fashion creations.

As an active underwater photographer and promoter of underwater world, Borut became, as a first Slovenian, a member of Ocean Artists Society in 2017.